My Life with Bruce Springsteen 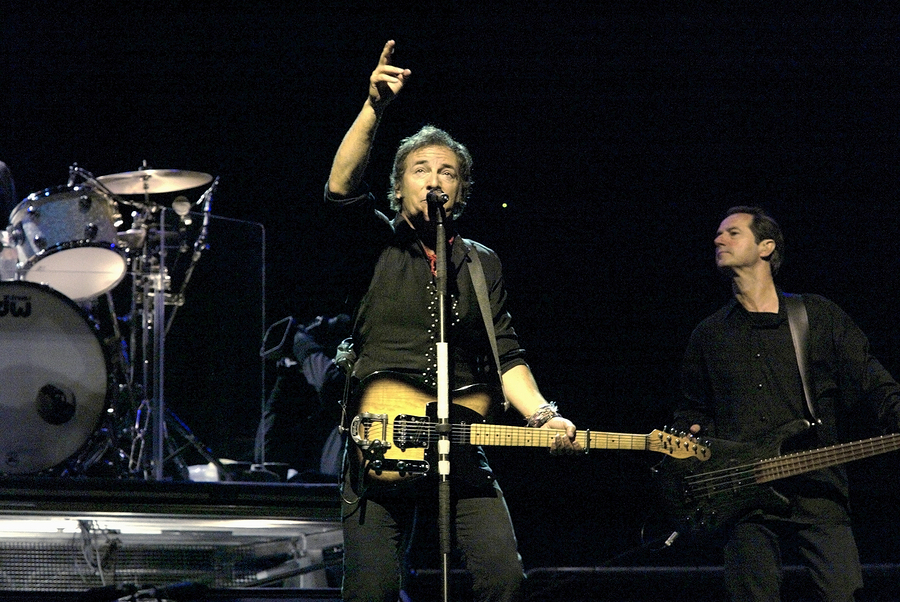 During Christmas break in the winter of 1977, my flock of the high school girlfriends reunited at Ann Lynch’s house to talk about our freshman year college experiences: the classes, the boys, the dorms. Ann, a double Latin and Biology major, always a quiet and studious girl, surprised all of us when she said, “You have to listen to this song.” She dropped a record on the stereo turntable and then jumped on her parent’s coffee table to sing, In the day we sweated it out on the streets of a runaway American dream. This was my first introduction to Bruce Springsteen.  We lived in the solidly mid-western part of the country and I was late to the party. Ann’s new college friends were from the east coast and so they had already been following the New Jersey son for a few years.

I was hooked. I listened to the albums “Born to Run” and “Darkness on the Edge of Town” all the time. “Rosalita” became one of our favorite party songs. Bruce spoke of the same quest romance that I had: I wanna know if love is wild, I wanna know if love is real. I longed to see to a live show but those were the years he was in a contract dispute and I had to wait until the fall of my senior year when the River Tour began. Once you’ve been to the Temple of Bruce, you are a convert. He played for nearly 5 hours of sweaty glory that night in September, jumping off the piano, body surfing the crowd and gyrating to the beat laid down my Max Weinberg. I got to see the comradery with Clarence, the Big Man and the way the band followed his tight lead. I didn’t have to wait years to see him again because he returned to Saint Paul just months later.

Springsteen songs became a backdrop to my life.  The harsh reality of working a grown-up job after college, paying rent, food and utilities and the expenses of keeping an old car running. I had a sour break-up with a college boyfriend that seemed overwhelming but “Badlands” or “Cadillac Ranch” could always rouse my spirits. Later came a new romance and marriage in my mid-twenties and Bruce was still a big part of my life. I was thrilled to get bootleg copies of live performances so I could relive the concert experience. I got tickets every time he booked the Civic Center in Saint Paul.  These were the days when ticket acquisition was always another exciting part of the concert experience. Before the current on-line Ticket Master (boo) process, we would assemble at the Dayton’s ticket office starting at 4 am, bringing chairs and blankets, waiting for the doors to open.  This was the chance to connect with other Springsteen fans with the usual question, “How many times have you seen him?”

Life was hard. My first daughter was born with multiple congenital heart and lung defects.  After two heart revision surgeries, she spent six months in the ICU unit at St. Paul Children’s Hospital.  She survived but has lasting cognitive deficits. I had another daughter four years later and lived the challenges of an at-home mother—always short on cash and in need of creative outlets. At the mark of year 14 of my marriage, my husband was diagnosed with a brain tumor. Our family lived through his three surgeries, chemotherapy, and radiation over the course of ten years.  In the last year of his life I was diagnosed and treated for breast cancer.

My oldest and dearest friend, Janet (we met on the first day of kindergarten) cried as she tried to comfort me and asked what she could do for me.  “Well, if you can arrange to have Bruce sit on my hospital bed and sing to me, that would be great,” I joked. Janet took the task to heart.  Her Notre Dame alumni friend was a neighbor to Max Weinberg. Janet called him and asked to connect to the Springsteen machine and somehow it all came together.  Bruce was scheduled to play in Saint Paul in May of 2009 and arrangements were made for the two of us to meet Bruce. We also got to hang out with Max and his son, who was filling in for part of that tour as the drummer because Max was booked with Conan O’Brien. He let us sit at the drum set and after the sound check he gave us the battered and autographed drumsticks. We ate dinner with Gary Tallent and had a glass of wine with Nels Lofren who, pre-concert, zipped around the hallways on a razor scooter.  Alas, no one could get close to the diva and recluse, Clarence Clemons. The concert was slated to start at 8:00 pm. It was getting close to show time and my fear was it was already too late. Then, ten minutes prior to show time, we were ushered into Bruce’s dressing room—just Janet and myself and Bruce.  I was mute with pleasure as Janet chatted him up.  She told Bruce my husband was dying and that I was being treated for breast cancer, although my bald-head certainly told the story. He growled, “Well, the E Street band is in the cheering up business.” We got to take pictures with him and he signed an oil painting portrait my sister had rendered. I got a smooch and he ended our visit by saying, “Well, I’ve got a show to do.”  And then he was gone.  We danced the rest of the night away from our upgrades seats still in shock at our experience.

My first husband died two months later.  I survived the breast cancer and the treatment. That fall, I reunited with my high school boyfriend in what could have been a Springsteen song, oh that first, good love. He asked me to marry him and I finally agreed eleven months later. Shortly after our ceremony, he was diagnosed with Non-Hodgkin’s Lymphoma. In the next four years of cancer treatments and a grueling stem-cell transplant, we realized there would no cure. We went to a concert the year before he died and so many of the songs were filled with messages of loss. He said, as many people do, “I felt like he was singing to me.” In the last months of his life as the cancer ravaged him, I would find him awake very early many mornings, crying, blaring “Streets of Philadelphia”. Phrases from the song fit his mood, marking his place in the cancer walk, I was bruised and battered, I couldn’t tell what I felt. I was unrecognizable to myself. My clothes don’t fit me no more, a thousand miles just to slip this skin.

What they don’t tell you, is the most difficult part of the After, is the grief that comes to live with you every single day is your person is gone. After the numbness wears off, the reality of the forever sets in. The things that are constants: a job and a house and responsibilities to parent adult children (additionally my two bonus kids). There are so many days of just putting on your Big-Girl panties and facing the world alone. And of course, a number of Springsteen songs expressed that loss and grief perfectly. The album, “The Rising” is full of widow songs! “Empty Sky” and “You’re Missing” were written about the 9/11 tragedies, but many songs speak to loss of many kinds. Here are lyrics to the song, “My City of Ruin”: Now there’s tears on my pillow, darling where we slept, and you took my heart when you left.  Without your sweet kiss my soul is lost, my friend, tell me how do I begin again?

And life pushes forward.  Springsteen, wrote a biography released in September of 2016, Born to Run, telling the story of his formative years, his musical influences and the story of the band, his marriages and his children.  Always reinventing himself, he decided to do a solo Broadway show at the Walter Kerr Theater that highlighted his life and songs. For months, there was a frenzy of ticket buying but I was shut out. Finally, in March, I had the chance to score some of the most sought-after tickets of the year and then I had to wait until September to go to New York City. I began to worry that built this experience up to such a large scale, that the real thing would disappoint.

I was silly to be worried. It was wonderful experience. A small, beautiful historic theater, a Spartan stage. And the boss–he’s a writer, first and foremost, tells the stories of his parents and his friendship with Clarence and life with the band with vivid, sensory details. He’s also deadly funny and highlighted the irony how he made a career writing about the working man’s life when he had never held a real job (that is, until the 5-day a week Broadway show).  Could this be the last live Bruce performance?  Maybe. If so, it was a great 14-show run over the last 38 years.  However, the night after my Broadway event, we heard he had arrived at a bar in New Jersey (10 minutes from his current home in the town he tried so desperately hard to escape) and jumped up on stage to play with the band.  My hunch?  He will never tire of playing for a live audience. It’s in his blood and the religion of rock and roll will keep him young forever.

And me? I went to my New York-Bruce weekend with a new person who understands and honors my grief and the lessons I learned from Bruce. That is, the belief in power of music to heal and that the heart is capable of infinite expansion, eventually making more room for love in your life.

Mary DesJarlais is the author of new novel: The Cutter’s Widow, available on Amazon.com and also Dorie LaValle.